Las Cafeteras And The Center For Cultural Power Present “If I Was President” Remix Ft. Sa-Roc, Boog Brown, QVLN, And Mega Ran 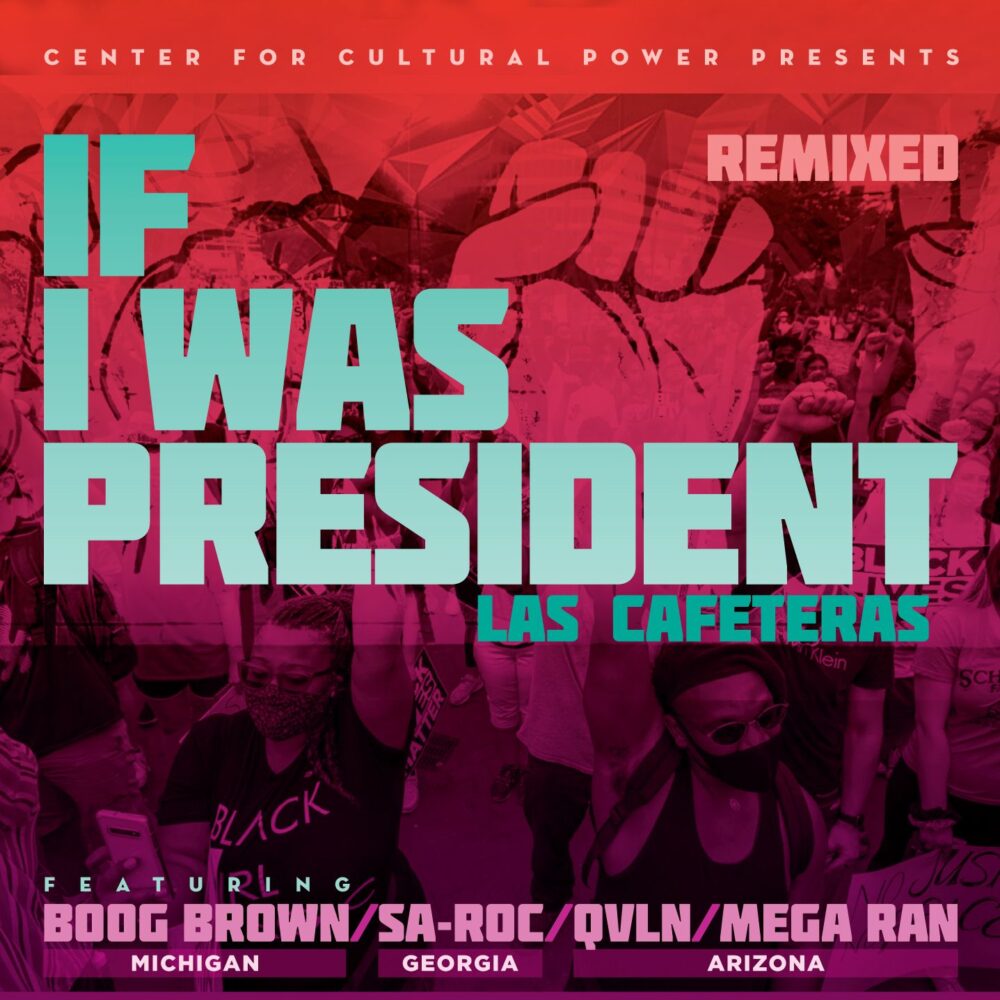 5 artists from 4 cities and 3 Swing states come together to elevate a
Collective Vision of America that represents Black, Indigenous, Working People of Colorwho changed the direction of the 2020 Election

L.A. based Las Cafeteras along with The Center for Cultural Power present the politically charged re-imagined song, “If I Was President” ft. Sa-Roc, Boog Brown, QVLN, and Mega Ran. The new song is the third edition to their critically acclaimed electoral anthem series. It is out now on all digital platforms.

“If I Was President” was originally released by Las Cafeteras in January 2017 as a musical form of protest to Trump’s Inauguration Day. Four years later, in the wake of record breaking turnout for the election by BIPOC communities and the recent historic wins in the Georgia Senate by Black, Latinx and Asian voters the song continues its roots. The new multi-ethnic hip-hop rendition of “If I Was President” highlights the needs and demands of the communities who shifted the outcome of the election and unifies 5 artists from 4 cities and 3 Swing states message to elevate a Collective Vision of America that represents Black, Indigenous, Working People of Color. The new song is released a week before Biden’s inauguration ceremony, a historically momentous transition, and coincides with the President’s First 100 Days in office which will no doubtedly set the pace and direction of the United States.

“The transition is not about an administration but an opportunity to transition to a country that is more equitable and responds to the needs of all its people,” states Cristina Uribe, Director of Campaigns at The Center for Cultural Power. Hector Flores of Las Cafeteras adds, “Chuck D once said that hip-hop was the CNN of the streets.  We wanted to keep that sentiment alive and have artist from swing states share what kind of future they would like to see over the next 4 years.”

On the night of Biden’s victory speech in November, he exclaimed loud and clear to the Black community, “you’ve always had my back and I will have yours.” Bolstered by those words, Las Cafeteras invited rappers Sa-Roc from Atlanta, GA and Boog Brown from Detroit, MI to join them. Sa-Roc and Boog Brown brought their voices and lyrical chops, as both black women and swing state residents, to this project to speak ‘Truth to Power’ and share the desires from the communities that changed the face of power in states across the country. “I’m part of a community that has historically borne the brunt of oppression and injustice sanctioned by the laws of this nation, yet thrived and played such a fundamental role in its development. It was dope to imagine what could be possible if there were an administration that actually valued and served the needs of the people who’ve formed the very bedrock of this country” says Sa-Roc. Reflecting back on the inspiration for her bars Boog Brown adds, “We know the power of the collective voice and to be a part of sharing such a profound message with such a powerful purpose is an honor.”

Arizona based artists, QVLN and Mega Ran, who were part of the historic elections which flipped the swing state’s electoral vote, were also invited to add their voices to the track.  QVLN comments, “it’s been my mission as a performer to create and drive a positive narrative to the masses.” Adding Mega Ran voted ‘Best Rapper’ in Phoenix comments, “It’s a question I ask myself every day; what I would do if given the highest office in the land? I was so excited to be a part of the song! It’s an honor to be a part of this track with some highly esteemed artists that I’m a fan of. Much love.”

“If I Was President” is the third edition to the critically acclaimed electoral anthem series released from Las Cafeteras in the last four months. In partnerships with socially conscious non-profit organizations, Las Cafeteras anthems advocated for the power of voting and in support of the BLM movement they worked with artists to unify Black and brown voices through song. The trilogy has received national attention from national newspapers and media outlets including The New York Times, NBC News, Latino USA and KCRW to name a few. It first started in October of last year with Las Cafeteras releasing “Long Time Coming” Ft. Degruvme, La Mera Candelaria, Scarub, and Klmsly. “Long Time Coming” is about the public unity of Black and brown L.A. artists to motivate Black and Brown voter engagement across the country, to serve as a call to take action for racial and gender justice and a future where we live in harmony with nature. The second release “Georgia On My Mind” Ft. QVLN, and Sergio Medoza was aimed to get Latinx voters out to the Georgia senate runoff elections and to represent the solidarity of Black and brown unity. Today Las Cafeteras presents “If I Was President” a hip-hop song that unifies a collective of Black and Brown artists, residing in and organizing communities of color in electoral college swing states, to offer revolutionary solutions to current and future social justice issues through music.

“a half-English, half-Spanish version of Ray Charles’s “Georgia On My Mind” — a rendition intended to reflect the rising tide of Black and Latino voters in the state.” – New York Times

“Their most recent collaboration, “Long Time Coming” with a collective L.A. talent, came out last month in support of the global Black Lives Matter movement and urging people to go out and vote.” –Latino USA

One thought on “Las Cafeteras And The Center For Cultural Power Present “If I Was President” Remix Ft. Sa-Roc, Boog Brown, QVLN, And Mega Ran”