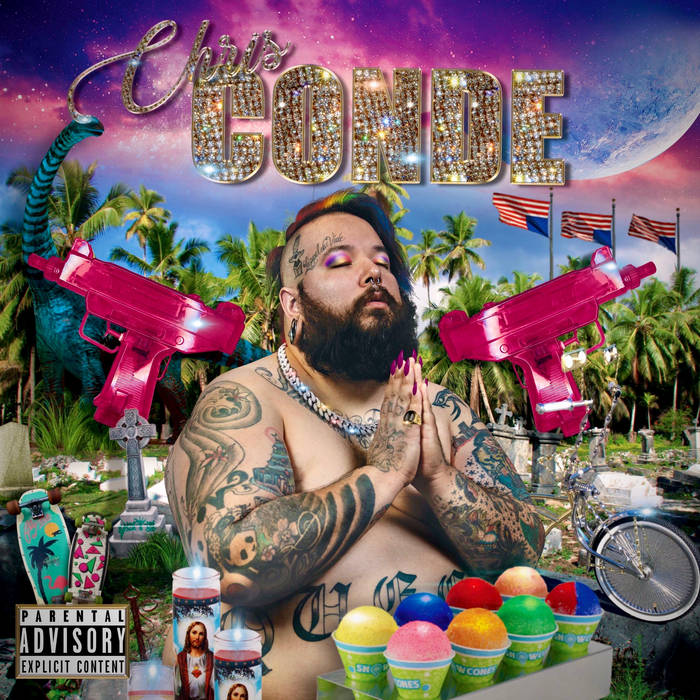 ATX queer-conscious rapper Chris Conde is celebrating the success of their very warmly-received album Engulfed In The Marvellous Decay with a brilliant and hysterical new video (https://youtu.be/fHTCaZzMrs4) for the single “Summertime Heat” as well as a record release show on September 18th at The Little Darlin’ in Austin, Texas.

The video and concert come on the heels of a flood of glowing local, national and international press for the album, including landing at #12 on Bandcamp, an “album of the year” declaration from Ghettoblaster Magazine, 9/10 stars (a rarity) from the French Magazine Sun Burns Out and a description as “revelatory” by Austin Monthly. And dropping soon is the Richard Whymark (Black Angels, Missy Elliott, PJ Harvey) directed video for “Summertime Heat”, a collaboration between Conde and Grammy-nominated inventor of cumbia electronica, El Dusty (Universal Records). The video is a joyous celebration of Mexican-American and LGBTQ culture and features cameos from Jeff Smith of Hickoids, Caleb De Casper, Audrey Campbell and Thomas Valles of Pleasure Venom and Austin Chronicle music editor/musician, Kevin Curtin in an unforgettable role as an angry Westlake, TX pool owner.

The September 18th record release show will celebrate Austin’s LGBTQ+ and BIPOC music communities and features Texas hip-hop supergroup Third Root and DJ Isis Payne. While the show is free to the public, The SIMS Foundation (which provides mental health and substance abuse support to the ATX music community) will be on-site to provide information and every donation gets you a raffle ticket for prizes from beloved local LGBTQ/BIPOC/woman owned CBD company, MARYJAE. Here’s the Facebook event for more info.

“This album deals with so much about what we’re all still going through in this pandemic,” said Conde. “So, I’m just excited to get on stage and safely gather in the backyard at The Little Darlin’ to share these songs live with my friends and family. It’s been a crazy year and a half and we need art, music and performances now more than ever.