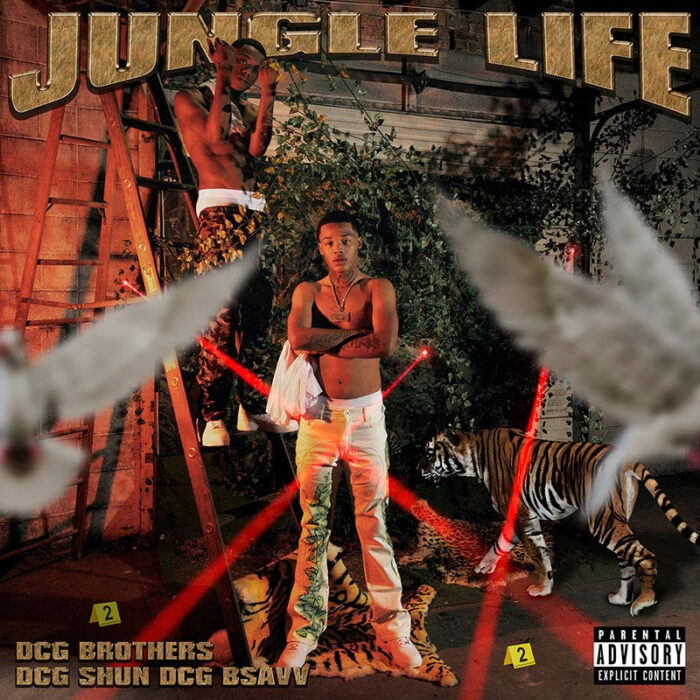 Coming straight out of drill’s birthplace, Chicago’s DCG BROTHERS are more than a refreshing injection of amusement into the scene that started it all: they’re one of music’s most exciting duos on the rise. Comprised of brothers DCG Bsavv and DCG Shun, the DCG Brothers share “Buss It,” the latest No More Heroes-directed video from their recent debut project Jungle Life.

“Buss It” finds Bsavv and Shun backed by a stellar instrumental from platinum producers Southside and Slowburnz, in which haunting piano high notes echo as if played in an empty cathedral, while volleys of booming bass keep it grounded in the streets. As the brothers mob in a crowded studio and maneuver through dark alleyways, they speak to the paranoia of life on the defensive while delivering the sharp imaginative punchlines that set them apart: “You know I’m still watching the back door/Trippin’ and s***, almost blew up my shadow.”

Though 18-year-old DCG Shun and 19-year-old DCG BSavv may seem like newcomers in the rap game, they’ve been perfecting their craft for years. Bsavv started rapping when he was 8-years-old–around the time of Chicago’s world-changing drill boom–inspiring his brother Shun to learn to spit and establishing a symbiotic artistic relationship that has lasted over a decade. Racking up YouTube videos by the million before Shun could legally drive, the duo became known around Chicago for their irrepressible personalities, drawing the attention of prolific music video collective No More Heroes, who paired their boisterous bars with eye-popping visuals to match. The duo earned acclaim from national media, including Pitchfork, with the hilarious “Mmhmm” ft. Msavv (3.3 million views), which deposited the three emcees on a golf course for eighteen holes of mayhem. DCG Brothers kept the momentum going in 2021 with “House Party,” produced by Internet Money, generating over 2.2 million views.

With much more music, and plenty more creative videos, and with the backing of No More Heroes and Atlantic Records, there’s no limit to how high DCG BROTHERS can rise.