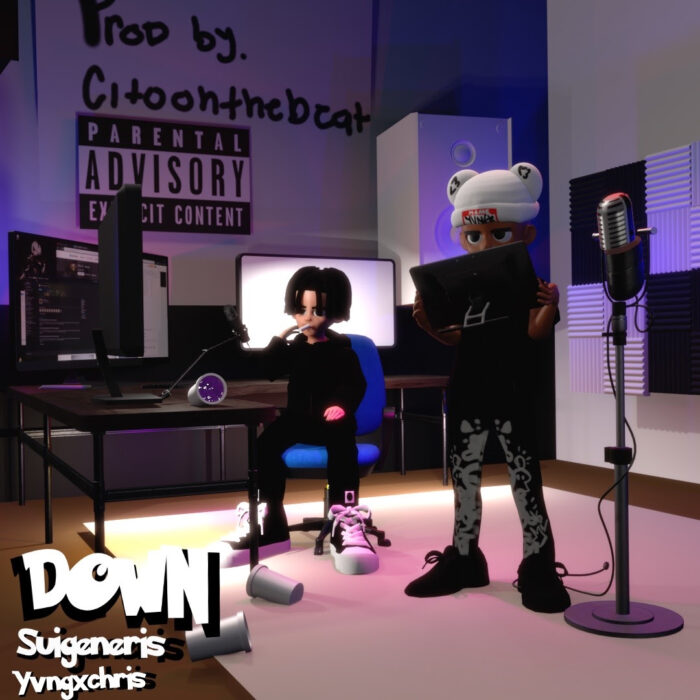 With a chip on his shoulder and the Bay on his back, Suigeneris is rap’s youngest veteran. With his seasoned, explosive delivery and tireless drive, the 18-year-old mogul is back again to share his new video for “DOWN.” The yvngxchris-assisted track, which kicked off Suie’s streak of loose singles this summer, features a pitched-up soul instrumental seamlessly weaved into the hard-biting trap aesthetic embodied by the pair of turnt up teens.

The video for “DOWN,” which peaked at #12 on SoundCloud’s New & Hot chart earlier this summer, finds the young rap duo going all out in the studio. Though they’re hard at work behind the mic at times, and raging like there’s no tomorrow at others, it’s often hard to tell the difference as the pair applies an equal share of their high-octane energy to both.

“DOWN” arrives shortly after Suie’s incendiary performance on Apple’s “Fire In The Booth,” hosted by Charlie Sloth. Paying tribute to his heritage with a Mexican flag draped on his head, the West Coast native tears up a gritty East Coast instrumental, eschewing melody and proving his lyrical bonafides. Suie’s “Fire In The Booth” freestyle is available to watch on Apple Music’s YouTube.

Suigeneris has been on a tear recently, stacking his SoundCloud page with heater after heater. Most recently, the artist returned to his high school with the explosive “BACK IN MY CITY,” and deconstructed the structure of a hit with his fierce “Song.” The CEO of his own clothing brand Demons N Angels a.k.a. DNA, a streetwear company with eye-popping design and skyrocketing sales, Suigeneris is always in the studio, cooking up his next batch of heat. Stay tuned for much more from the rap prodigy as the summer moves along.

Watch Suie’s “Fire In The Booth” freestyle with Charlie Sloth: