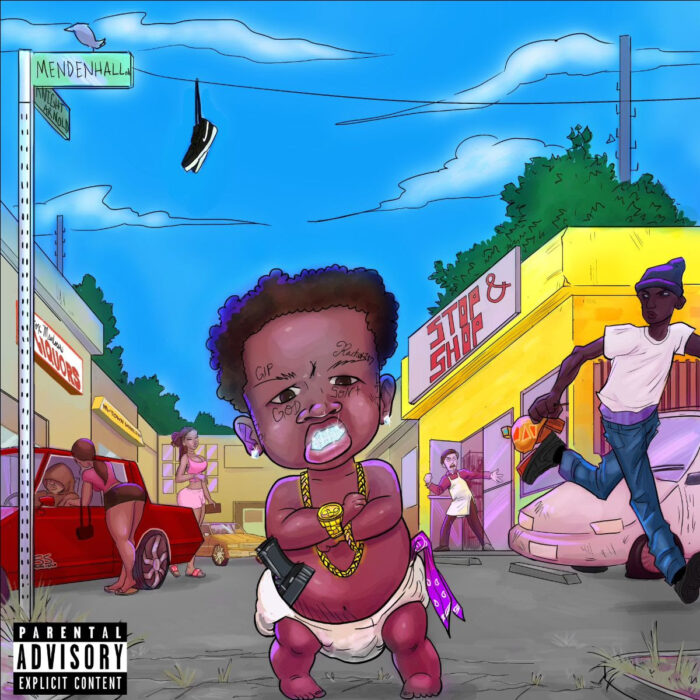 With a charismatic personality as “gigantic” as the pockets he pads with racks, Big Moochie Grape has been serving up raw, uncut bars rooted in Memphis tradition, but irreplicable in execution. Now, the Paper Route Empire artist returns to share the video for his laid-back banger, “East Haiti Baby.” The intro and title track from his recent East Haiti Baby project, anchored by the same Bill Withers sample that powered Blackstreet’s “No Diggity,” finds Moochie delivering soulful flows over a softened beat that lets his Southern drawl glide over every bar with ease, nodding to his mentor Young Dolph with lines like, “Know that I’m wet cause I’m signed to a dolphin.”

The video is a reflection of the ups-and-downs from Moochie’s life on the streets to the stage, as the larger-than-life stepper stands on his own through it all. Rocking layers of icy chains, including one of the “East Haiti Baby” pieces featured on the project’s cover, which sits right below his PRE pendant, Moochie walks himself from the director’s chair to center stage of the shoot. It’s Moochie’s show, it’s Moochie’s world, and it’s a blessing just to live in it.

Aided by signature Tennessee-style production from Bandplay, Sosa 808, Ayoza, and more, the tape chronicles Moochie’s rise from the trap to the top, showcasing the street acumen and sly grin that has him rising in his city and beyond. East Haiti Baby is home to Moochie’s ice-cold singles “I’m The One” and “Never Had Sh*t,” each of which earned well over 1 million views on Youtube in recent weeks. Continuing a dominant year for Paper Route Empire as they honor Young Dolph‘s legacy, Moochie enlists Key Glock and Kenny Muney for features, and shares a new verse from Dolph himself on mixtape highlight “Fun.” Whether he’s bouncing over a Bill Withers’ sample on “East Haiti Baby,” belting out cash-crazed melodies on “Money Money Money,” or swapping spitfire flows with Dolph, the Memphis native’s colorful charisma is felt throughout the 15-track tape.

Big Moochie Grape burst onto the scene in 2020 with Eat Or Get Ate, an hard-hitting EP that earned coverage in XXL, UPROXX, 2DopeBoyz, HotNewHipHop, and more. Home to singles like “Big Juice” and “Uh Huh Uh Huh Uh Huh” (4.5 million views), Eat Or Get Ate established Moochie as one of PRE’s most valuable players. The rapper returned with a vengeance on Paper Route Empire’s PAPER ROUTE iLLUMINATi mixtape, turning in highlight tracks like “Illuminati Business” and “Non Stop” (1.3 million views), and made his mark on Paper Route Empire Presents: Long Live Dolph, delivering the powerful and defiant “In Dolph We Trust“ (1.4 million YouTube views).