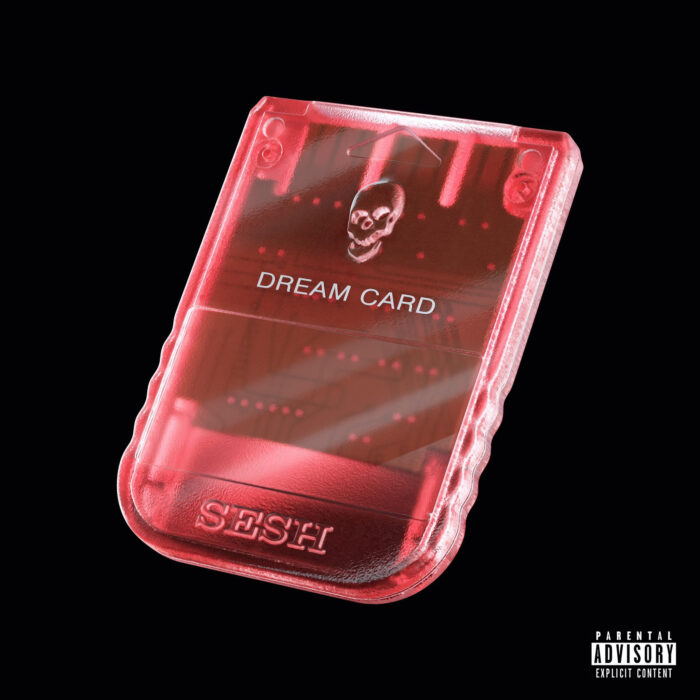 Always working and never disappointing, BONES is beloved by fans and respected by his peers for his consistently excellent and uncountably prolific output. The TeamSESH chieftain delivers once again with DreamCard, his new album and his third full-length of 2022. DreamCard is produced in full by ghost/\/ghoul, one of the first members to join TeamSESH back in 2011. Unlike most producers on the label, ghost/\/ghoul isn’t a frequent collaborator with BONES–most of the music from ghost/\/ghoul’s extensive discography is purely instrumental, captivating enough to thrill without vocals or rapped verses. In over 10 years in the TeamSESH collective, the two have only collaborated three, on “WhiteZombie”(2012), “LastOneThereIsARottenEgg” (2019), and DreamCard opening track “Silverado,” released as a single earlier this year.

DreamCard proves that the the two TeamSESH artists have impeccable chemistry–BONES mostly eschews singing in favor of hard-nosed raps, as he weaves between ghost/\/ghoul’s glitchy synth melodies and subsonic percussion. Highlights from the album include the creepily atmospheric “BananaPeels,” the spritely “Timbaland,” which contains a lyrical reference to the titular artist’s verse on “Are You That Somebody?,” and the pugilistic, low-talking “LowLife.” On the tape’s final track, “PanoramicRoof,“ BONES delivers the heartfelt singing absent throughout the rest of the tape, ghost/\/ghoul’s soaring synths adding pathos to BONES’ plaintive melodies. Spanning 17 tracks, including a few immersive instrumental tracks from ghost/\/ghoul, DreamCard is available everywhere via TeamSESH/EMPIRE.

DreamCard continues a busy year for the Michigan-born BONES, marked by exciting collaborations and unexpected co-signs. In July, the underground hero released AmericanSweetheart, which subsumes a variety of styles into BONES’s dark aesthetic, and packs in references to films like Planes, Trains & Automobiles, Pee Wee’s Big Adventure, Rocky IV, and more. BONES connected with Drew The Architect for the heart-wrenching “PackRippedOpen.” In April, the underground hero shared Withered, a full-length project. Created in collaboration with TeamSESH producer grayera, Withered finds BONES alternating between laid-back yet emotional anthems and commanding, verbally blunt bangers, including the emotionally charged lead single “TheOne.” Over the summer, BONES got an unexpected shout out from Justin Bieber, who shared a video featuring his 2019 song “AirplaneMode,” which now has over 285k video creations on TikTok. 2021 was a remarkably busy year for BONES, marked by five full-length albums including Scraps w/ Lyson, ForbiddenImage w/ cat soup, InLovingMemory (BONES recently shared the video for highlight track “RainCloudsFollowMe“), PushingUpDaisies w/ Deergod, and BURDEN, and capped off by “DeathWish,” an ’80s pop-influenced banger by BONES’ alter ego Ricky A Go Go.