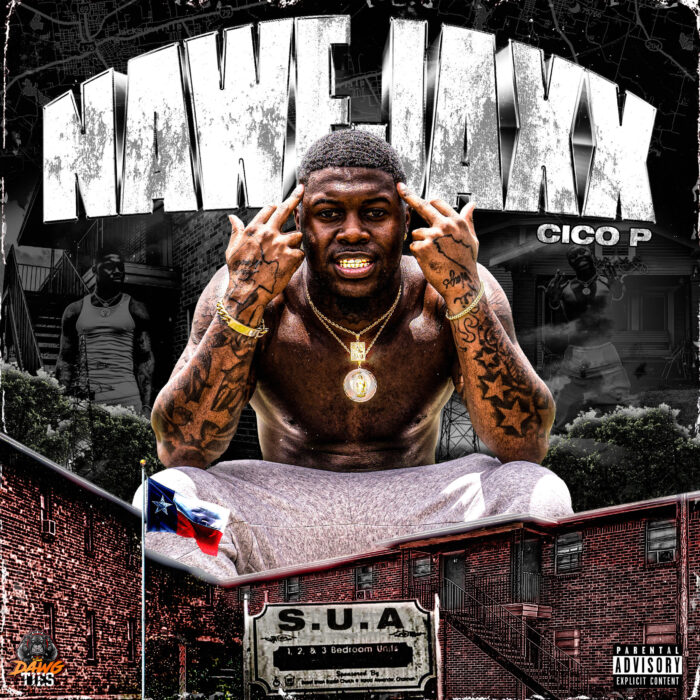 Rising in the rap game on the back of his viral single “Tampa,“Cico P proudly represents Jacksonville, TX, a small East Texas burgh that he calls home. Welcoming listeners into his expansive sonic world as he explores life in his hometown, Cico shares NawfJaxx, his brand new project. Delving into Cico’s upbringing and exploring the ins-and-outs of being a rising rap star, NawfJaxx is a smoothly eclectic project that synthesizes several waves of Southern rap into a distinct mix, working in elements of wavy SoundCloud rap, high-octane trap music, and country-fried guitars. Cico is a versatile vocalist with an impeccable sense of rhythm, using auto-tune to enhance songs like “Rocky” and getting vulnerable with his gently melodic drawl on “See Me.”

NawfJaxx is home to Cico’s single “Tampa,” which peaked at #91 on the Billboard Hot 100 in May, and generated tens of millions of streams on all platforms. Beyond “Tampa,” the project showcases recent singles like  “Half The Time,” a slow jam with an appearance from heavy-hitter Kevin Gates, and “Prophecy,” a hyperactive, piano-laden collaboration with Spinabenz. Featuring additional appearances from Cico’s fellow Texans Maxo Kream and Yella Beezy, NawfJaxx is streaming on all platforms.

Along with the project, Cico releases the video for “Dirty,” his new collaboration with Maxo Kream. Armed with an ethereal instrumental with ambient piano and crisp snares, Cico delivers words of warning to those who would step to him, while Maxo stops by to tell a quick story about his illicit past. In the video, the two Texans gather a crew, taking out their cars to a local underpass and strutting their stuff.

NawfJaxx is the culmination of Cico’s meteoric rise, propelled by “Tampa” and continued by his recent run of high quality videos. Originally released in late 2019, “Tampa” began its steep climb in March when the song, and particularly its lyric “that boy bad news he a menace to society,” became the center of a popular TikTok trend, inspiring over 140k video creations and propelling “Tampa” to the top of Spotify’s U.S. Viral 50 chart. Over 61 million streams later (including over 9 million views on the YouTube video), “Tampa” broke into the Top 50 streaming charts on Apple and Spotify (where it peaked at #47), reached the Top 30 of the U.S. Shazam charts,and the Top 50 of the Rolling Stone Chart.

Thanks in part to Tampa, Cico has seen his streams increase over 500 fold, catapulting him to #3 on Rolling Stone’sBreakthrough 25 chart in May and earning Cico recognition from YouTube as an Artist On The Rise. “Tampa” has been featured on prominent Spotify playlists like Rap Caviar, Hip Hop Central, Internet People, and Teen Party, as well as Today’s Hits, Rap Life, Viral Hits, Future Hits, Chill Rap, and On Repeat on Apple Music. NPR listed “Tampa” as one of their 27 Favorite Songs of 2021 so far.

With NawfJaxx, Cico proves that he’s one of the most promising rappers in a bustling Texas rap scene. The future is bright for the 23-year-old rapper, as he rises from the bottom of the map to the top of the game.