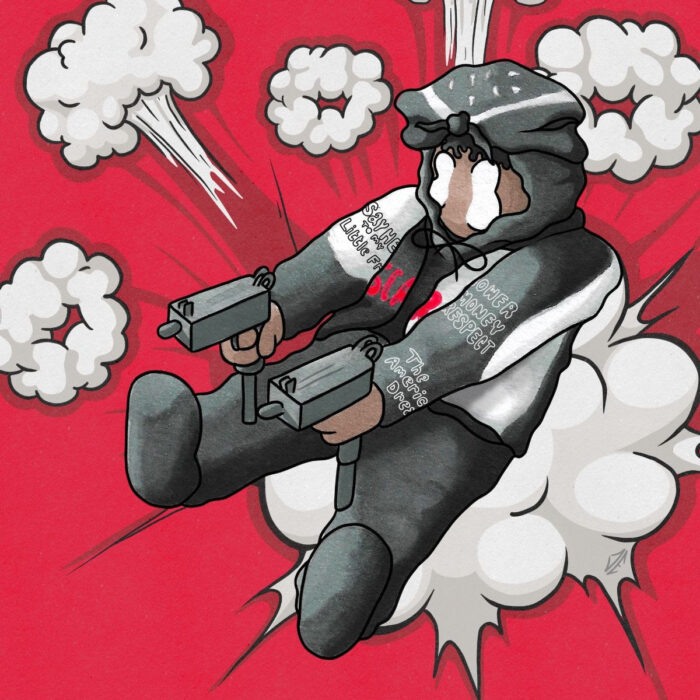 Rising rapper $NOT might be an introvert at heart, but he’s an extremely charismatic performer in his shows and music videos. Coming through with an inventive clip for his latest single, $NOT shares the video for “RED.” Produced by ToryOnTheBeat, “RED” fits the laid-back, yet aggressive mode that $NOT has perfected, delivering effortless flexes and promising to lay down the law if he needs to: “Get the f*ck up out my way, b*tch, I got a strap/Body on the ground, we gon’ leave you where you lay.”

Directed by UnkleLuc, the video is an exploration of $NOT’s feelings regarding his rising fame–more and more people genuflect to his success, but he can never know if they truly have his back. The video makes the metaphor plain, as $NOT portrays a ruthless crime boss who places his trust in the wrong men.

“RED” arrives as $NOT climbs charts with “Tell ‘Em,” his collaboration with fellow riser Cochise. On “Tell ‘Em,” $NOT provides a calm counterpoint to Cochise’s hyperactive delivery, bodying the beat with his deadpan warnings of impending doom. With a video directed by $NOT’s frequent collaborator Cole Bennett (8.5 million views in one month), “Tell ‘Em” has become a phenomenon, generating over 11 million globalstreams per week and becoming $NOT’s first-ever hit on the Billboard Hot 100, where it peaked at #64 and currently sits at #90. “Tell ‘Em” arrived in the wake of “Whipski,” a breezy collaboration with Lil Skies, complete with another Cole Bennett-directed video, following the loose storyline established in  “Revenge” (11.3 million views) and “Mean” ft. Flo Milli (9.7 million views). Always ahead of the curve, $NOT dropped an NFT, exclusively on Zora, to coincide with the release of “Whipski,” and he teamed up with Rose In Good Faith for an exclusive merch drop to accompany the release of the “RED” single–many items have already sold out. Last week, $NOT collaborated with Kevin Abstract and slowthai on Abstract’s new single “SLUGGER.”

Last year, $NOT released Beautiful Havoc, his latest project. Taking his songwriting to a new level, Beautiful Havoc interrogates the 22-year-old rapper’s pain, digging into the betrayal and hardships that shape his prickly and misanthropic persona. With production from the likes of Powers Pleasant, Eem Triplin, Woodpecker, and more, Beautiful Havoc offers a bright and diverse sonic palette, allowing $NOT to showcase his elite melodic instincts and provide a contrast to his dark, self-hating lyrics. Beautiful Havoc hosts several well-received singles, including collabs with iann dior and Denzel Curry, and is home to “Mean” (35 million Spotify streams), the Flo Milli-featuring slapper that inspired a viral trend on TikTok (over 700k combined video creations). Beautiful Havoc is available everywhere via 300 Ent.