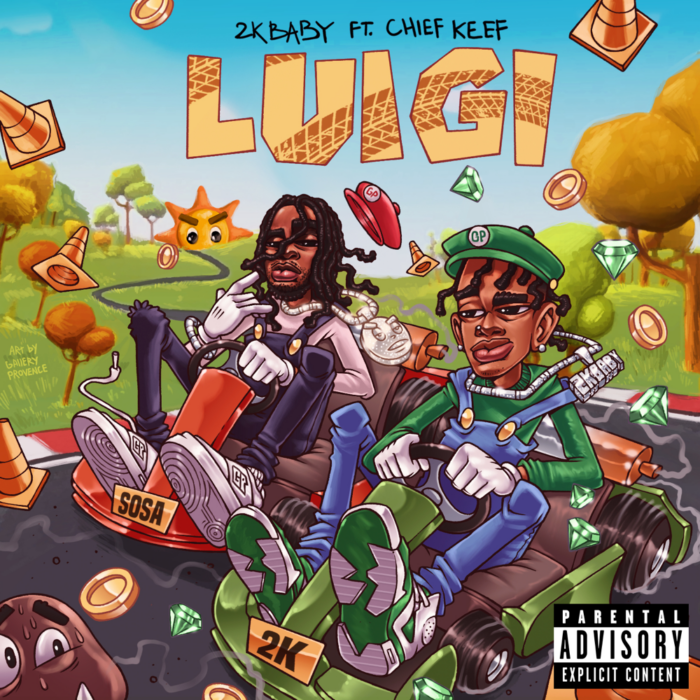 on Masked Records / Warner Records. The track also arrives with a striking video, which features a harrowing trip to the hospital and a chaotic bank robbery. 2K has already been growing into a generational talent as a rapper and singer, and with stylish songs, videos, and influential co-signs, his stature is rising significantly. Listen to “Luigi” HERE.

Like the best 2K songs, “Luigi” is aspirational, born from struggle. It opens with Chief Keef serenading: “Momma if I made you cry then I’m sorry.” 2KBABY follows as the beat kicks in, rapping with staccato melodies. He describes finding himself in the booth, growing older, and feeling lonely at the top, but the message is ultimately positive: he’s grateful. The visuals are vibrant, featuring a bank heist with robbers in animal masks and a party full of rambunctious dancing and drinks flowing as the song comes to a close. It suggests that 2K is un-phased by success and ready for his moment.

The song follows 2KBABY’s recent singles “Zack & Cody,” with DDG, and the anthemic “Great White.” Earlier this year, he also put out “Like This,” a collaboration wit esteemed EDM and pop producer Marshmello. In January, 2KBABY released the two-track package, THE 2K STIMULUS. It’s been a productive year since he touched down in 2020 with his stunning debut EP Pregame Rituals. That EP—featuring “Old Soul” with G Herbo, as well as his RIAA Gold-certified hit, “Old Streets.” To date 2KBABY has garnered praise from a host of taste-making outlets including Pitchfork, Complex, XXL, The FADER, UPROXX, and more. “Luigi” places 2K further along on the path he has carved for himself up to now, focusing his bright melodies into a sound and style that feels uniquely his.