DHH Next Up: Cameron and the Slumberknights 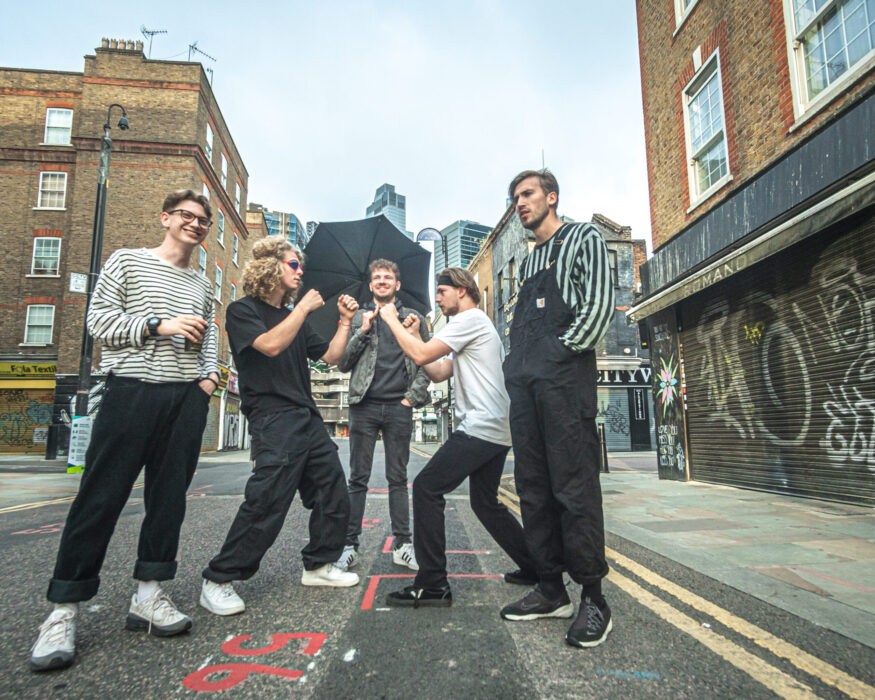 Cameron and the Slumberknights are a UK-based Hip-Hop group who recently released a very dope song, Old Jacinto. “Old Jacinto” is an all-around special song. Supported by the uplifting choir vocals, the instrumental is beautifully elegant. This is a truly uplifting and inspirational piece of music.

Fronted by South African Rapper/Songwriter Cam The Slumberknight (Cameron Donald), London-based Contemporary R&B/Rap band Cameron and the Slumberknights have gone from strength-to-strength since releasing their debut single Pour in early 2020, despite enduring two national lockdowns in their first year as a group. Pour and it’s follow-up – Midnight (Radio Edit – have earned the band over 100,000 streams, as well as acclaim from the likes of BBC Introducing, SOFAR Sounds, Amuse and Earmilk amongst other media.

What’s up Cameron? How are things with you and the band?

Yo! We’re all still riding high on the release of Old Jacinto and our first live performance since March 2020, when the U.K. went into lockdown. Both the release and the performance took place on the same day, which made it really special. It was also the first time we had all been together for a minute.

The song tackles metamorphosis and the struggles people face within the transition from child to adulthood. It’s definitely a topic that many people can relate to, did you write it with that thought in mind or was it just something you were dealing with at the time?

It’s definitely a personal song; Old Jacinto was written for my final project at university, where I studied songwriting. I was really interested in exploring metamorphosis as a theme, relating it to my transition out of education (finally) and into the world, as well as my transition into adulthood. The song touches on the concept of The Gloom, which is a seed of The Slumber. Unfortunately, the concepts and themes of The Slumber are relatable to the people listening to our music because the pains I’ve felt – that we each feel – are being found out to be more and more common, particularly amongst the band’s generation. It’s always really touching to get messages from listeners about the way they’ve been interpreting our songs.

What was the reaction from your family/close friends after hearing the song? Taking that into consideration does it make it difficult for you to be vulnerable when it comes to songwriting?

What is songwriting if it’s not vulnerable? Every time I put pen to page a piece of me is inked into the paper as well. That can’t be for nothing. Whilst songwriting is a cathartic experience, it isn’t necessarily an easy one. I suppose it’s not difficult to be vulnerable in my writing, because I might just be vulnerable. It’s difficult for a lot of people to live with their vulnerabilities. Fortunately, my family and friends have always been supportive of my ambitions as an artist and for the Slumberknights.

How were you able to enlist the help of Pete Smith for the song?

Our university had organised a sit-down with Pete in order for me to get some feedback on my music. He picked out Old Jacinto from the Slumberknights material when the project was in its very infancy, and had us record it with him at Dean Street studios in Soho. Working with Pete was a trip!

“Old Jacinto” is a very introspective song. Has music always been your outlet for coping with personal issues? Are there any other hobbies you have that help you with this aside from music? Thoughts on therapy?

I think as I’ve gotten older I’ve become a lot more self aware and that’s being reflected in my music. That said, I don’t think it does help me cope with my personal issues, and might even add to them, but it does help me explain them and understand them better. I am definitely not a sad person, and don’t necessarily have any “personal issues” that my peers don’t have (I don’t think). I’ve never considered therapy or taken part in it; I think a lot, though.

What made you decide to include cassettes in the artwork of each of the 3 singles?

The cassettes are representative of The Slumber, the songwriting universe I’ve been constructing with the Slumberknights. The idea is that the cassettes are jumanji-esque, and the songs suck their listener into our world. It’s a concept we’ll be exploring more in our future releases! They were designed by the incredible Liva Kacara!

What exactly is Beautiful Fiction?

Beautiful Fiction is a label I started with Dan Formoso and JoeTurone in 2015 to release our music through. Though Joe’s not involved in the company anymore, he and Dan produced my earlier projects – before I met the Slumberknights. The company has since evolved into a live music promotion, with digital marketing and management endeavours as well. It’s a dream of mine and Dan’s, really!

You and your fellow bandmates all met at University. Did you go to school with the idea that you would eventually pursue a career in music? How did the band decide to come together?

We all studied at London’s British and Irish Modern Music Institute, and decided to form the band after some encouragement from Mama’s Gun’s Andy Platts, who helped me realise now was the time to bring The Slumber to life. The guys in the band are a huge part of the sound – and the vision – that I’ve been cooking up in my head and exploring in my writing for the past few years.

I’ve been recording myself since I was 11-ish so this was more-or-less always the career I wanted to pursue. Even before I fell in love with rap music I was obsessed with writing – I wanted to be an author whilst at primary school.

I feel that people, whether they’re an artist or not, should be able to speak on and raise awareness for social justice initiatives if they want to. I certainly don’t feel that anybody is obligated. I suppose, in most cases, artists don’t like feeling obligated to do anything.

I’ve been told that our music is very nostalgic, and very chill. Our fans have added us to a fair few sad-chill playlists! I think if you were born in the mid-90s like the band was, or in the early noughties, you’ll enjoy the themes we try to explore in our music as you’re probably exploring them yourself in your day-to-day life! There’s a lot of exciting music brewing in our home-studio and we hope to finish the year strongly as well, so now is a great time to see what our band is about!

What’s next for you and the band? Can we look forward to an album before the year is over?

Throughout the pandemic we’ve been working on new music – our best music yet. I think I really became an adult across our first and second lockdowns, but like everyone my age I think I’m doing it quite badly. During these strangest times I’ve definitely gotten to know myself better and as a result my writing has become sharper and more authentic. We’re hoping to put out a song or two before the end of the year, and then we’ll see what next year holds for us. Like I said though, we’ve been working on some really special tracks and I’m keen to crack on with them!

Keep up with Cameron and the Slumberknights: